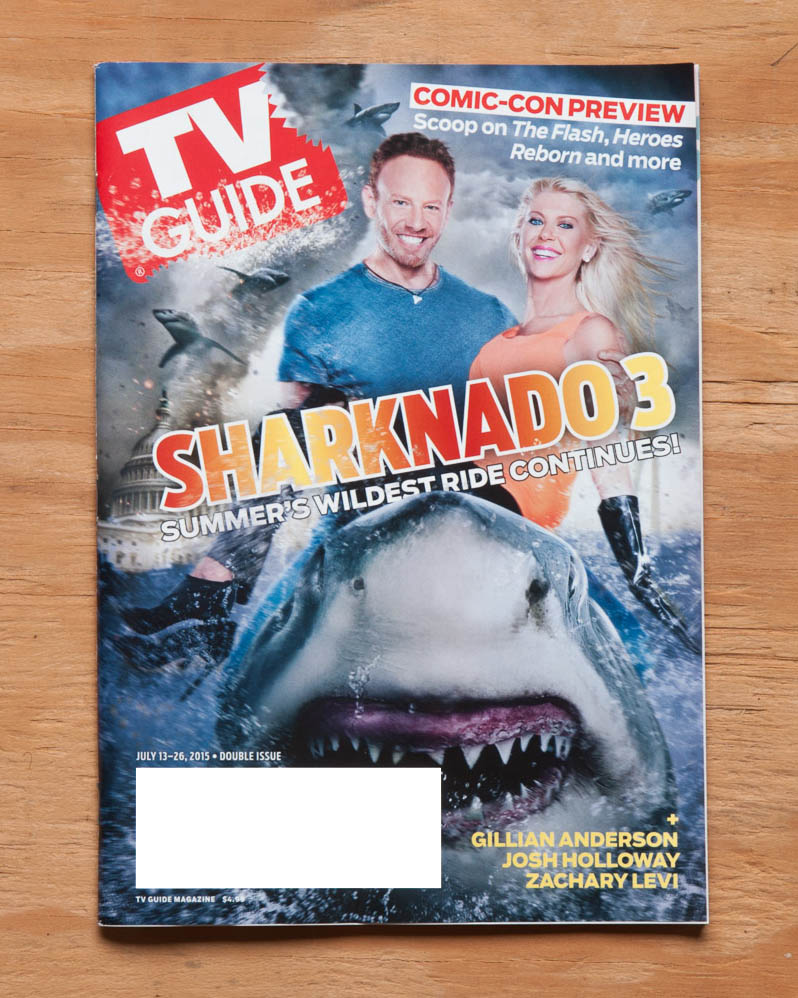 I never bothered to watch Sharknado when it first aired. My reaction when I first heard about it was a big WTF, and I dismissed it as just another dumb direct-to-TV/video flick. Same went for Sharknado 2: The Second One.

I did appreciate the titles on some level though, just because of their ridiculousness. Thing is, 10-15 years ago, those ridiculous titles alone would’ve been enough to get me to watch them, because back then I loved watching crappy movies, most of them being horror films. Yeah, the Sharknado films are really more, uh, natural disaster flicks I guess, but if there’s somebody getting maimed for whatever reason, it qualified for me.

As I watched those B-grade poo piles, I never was fully enjoying myself. I mean I wasn’t a total idiot; I knew they were bad; I had just convinced myself they were so bad they’re good. But there can be a very fine line between movies-so-bad-they’re-good and bad-movies-that-are-bad-just-because-they’re-bad. Back then I walked all over that line. I convinced myself there wasn’t one.

So, throwing logic to the marine-animal-tossing wind (caution and better judgement sucked up along with it), I thought “Fuck it. I’ll give Sharknado a try.” Would there be joy to be found in its supposed satirical tomfoolery? Or will it just suck like the sharknadoes themselves? I sat down with my dinner (so at least I wouldn’t totally be wasting my time), turned on Netflix, and…

Eh… well, it was bad. No surprise there. BUT, it was obvious that director Anthony Ferrante and crew knew exactly the kind of movie they were making, and I can appreciate that. I probably wouldn’t watch it again, though. If anything, it wasn’t quite campy enough for me throughout the whole movie. (The last twenty minutes were amazing, though!) Killer Klowns From Outer Space? They Live? The Toxic Avenger? Now THAT’S good camp right there.

But this is where the intervention comes in. If anything, Sharknado made me think back to all those times years ago when I would watch movies I knew were of questionable quality and taste, so there was a bizarre feeling of nostalgia for me as I watched it. Not a longing for bygone days, but a happiness that my movie watching palate has since shifted its tastes.

That change happened because of a good friend of mine whom I first met about nine years ago. Any semblance of good taste I have—and the ability to tell the difference between good-bad and bad-bad—I owe it to her.

I finally realized the lie I was telling myself all those years. She introduced me to The Shining, for example, now one of my favorite horror films of all time, which I never bothered to watch until then. Why? Because my schedule was too full with the likes of Trailer Park of Terror.

Sometimes, bad movies are just bad. Or at the very least, not very good. I finally accepted that. The last nine years of my movie-watching life have been a lot more enjoyable than those before.

Sure, everyone’s going to have their own tastes. One man’s trash(y movie) is another man’s treasure, after all. But if you find yourself watching a movie that you think you like, but leaves you feeling less than satisfied or worse, maybe even reaching for another bad movie to fill the void, you may just have the same problem I did. Get help now. Tell a friend. It’s never too late!

I haven’t seen the second Sharknado yet, and I missed the first airing of the third one, (affectionately and aptly subtitled Oh Hell No!) on Syfy on the 22nd, but what the hell (see what I did there?), I’ll probably watch those too at some point. Yes, I still do knowingly make poor choices sometimes, but at least now I don’t try to tell myself I’m not making them!

Other than musing on bad movies and good friends, one thing I actually wanted to mention about the TV Guide Magazine article itself (that really doesn’t have much to do with Sharknado): I had no idea Bo Derek was a photographer. She shot the cover and interior photos for the article. I found a few other examples of her work online, but no portfolio or anything like that. Anyway, from the little I saw, she’s good!

Also, as an aside, if you want to experience one of those really bad horror flicks from my younger days, hailing straight from my hometown area no less, check out Night of the Snakehead Fish. I’m lucky (!) enough to own this one on DVD, but the whole thing is on YouTube (the audio gets out of sync though, which makes it even harder to watch). This one I’d say is 98% bad-bad with a few good-bad moments. Please don’t hunt me down if you actually watch it.